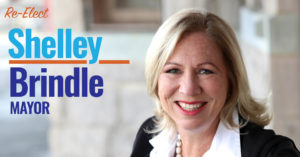 Westfield Mayor Shelley Brindle has demonstrated her ability to unite people in support of a shared vision, the same skills that enabled her to lead HBO’s digital transformation and become the first female in HBO’s C-suite in her professional career.

Mayor Brindle’s leadership has not only delivered a zero percent municipal tax increase for the first time in decades, but has driven significant progress on other priorities such as road paving, communication, and historic preservation; community focused initiatives such as AddamsFest, public art exhibits, Westfield 300, and Open Quimby; new business friendly policies and public support for our business community; and leading through the challenges of an unprecedented global pandemic with empathy, facts, and decisiveness.

The hallmark of Mayor Brindle’s leadership has been ushering in a culture of inclusion, collaboration, and service. Immediately upon taking office, Mayor Brindle initiated an open volunteer application process to harness the talents of our Westfield community to serve on our Boards & Commissions. She further engaged residents by establishing new Mayor’s Advisory Councils to focus on the previously underserved, such as Seniors, Mental Health, Adaptive Needs, and Human Relations.

Mayor Brindle has taken a long-term and holistic approach to the Town’s most pressing challenges, and believes transparency and engagement are key to driving progress and innovation. This has been evident in the Town’s most recent significant strategic initiatives, the Master Plan and Parks Strategic Plan which have been driven by public input. Having shepherded these initiatives since she was elected, they now move into the next phase of implementation and are poised to transform Westfield’s historic downtown and recreation facilities.

“It’s been incredibly rewarding to see the same leadership principles I employed at HBO transfer successfully to the public sector. At the end of the day, everyone wants to know that they are seen, heard, and valued, and are part of something larger than themselves. Whether it’s getting Game of Thrones to smart phones, or reimagining our historic downtown, visionary progress fundamentally comes down to harnessing the collective talent of those you lead.”

Mayor Brindle chose to leave HBO in 2016 to pursue public service and advise companies on growth and innovation strategies. She continues to pursue her passion of championing female entrepreneurs and leaders, and believes one of her greatest responsibilities as Westfield’s first female Mayor is to model strong, effective, and ethical leadership for a generation of boys and girls.

Mayor Brindle and her husband, Kip, are 27 year residents of Westfield and graduates of the University of Virginia, where they met. They have three children, all educated in the Westfield public schools: Grace, a senior at Carleton College; Nora, a sophomore at The Ohio State University; and Nick, a sophomore at Westfield High School, who are joined by their two rescue dogs Benny and Juno, and any number of foster dogs waiting for their forever home.