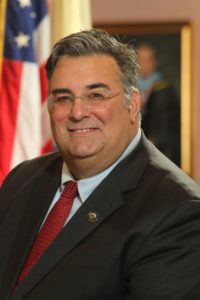 Chairman Alexander Mirabella brings experience in business and public service to the Union County Board of County Commissioners. First elected in 1997, he is serving his eighth three-year term. He has served as Vice Chairman five times. He was once again sworn in as Chairman for the sixth time for 2021, after serving in that capacity in 2020.

As Chairman in 2020, Mirabella oversaw Union County’s response to the pandemic, including the creation of the COVID-19 drive-through test center at Kean University and free walk-up mobile test sites in local communities, which have tested more than 100,000 residents.

For 2021, Mirabella announced a series of initiatives, entitled “Union County Rising,” which include COVID-19 testing and vaccination announcements, business and economic development programs, parks improvements, and services that reflect the Board of County Commissioners’ values on inclusion and acceptance.

Mirabella also oversaw the expansion of the Office of Veterans. He organized the annual Columbus Day Italian flag raising event and was honored by the Italian Tribune with the “Christopher Columbus Man of the Year Award.”

He was instrumental in creating the Union County Office of LGBTQ Affairs, the first office of its kind in New Jersey. The office organizes outreach and advocacy event, and community outreach, among its functions.

An advocate of education, Mirabella has been recognized for his support of Union County College and was instrumental in the creation of the Union County Vocational-Technical High Schools (UCVTS).

He was first elected to the Roselle Park Borough Council in 1991 and served until 1996. He graduated from Hobart College in Geneva, N.Y. with a degree in Economics. He and his wife, Phyllis, have a son, Alexander, and a daughter, Micayla.