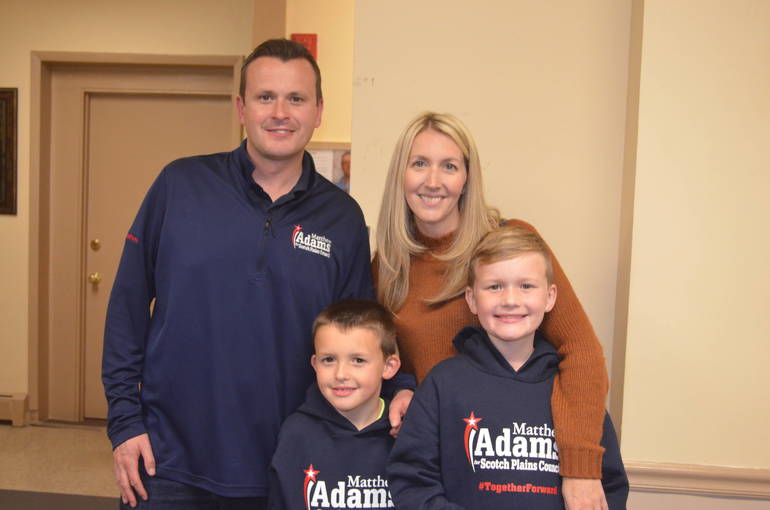 And The Winner in Scotch Plains is Matt Adams (TapInto)

SCOTCH PLAINS, NJ — Scotch Plains Councilman Matt Adams, who was appointed to the township’s governing body in April to finish Josh Losardo’s unexpired seat (vacated when he became mayor), has won the special election to fulfill the term by defeating first-time Republican candidate Deanna Dell-Bene on Tuesday night. Although Dell-Bene conceded the race, the results are still unofficial.

“We ran this race on a simple premise, which was: let’s just move forward,” Adams told supporters at his campaign victory party at Jerseyland Community Center. “Let’s do the elusive things, the things that have evaded progress for far too long. And the voters responded to that tonight. I can’t thank you enough.”

“I’m not going to say too much until it’s really official, but it’s really looking good,” Adams added. “When it’s official, we’ll have a party.”

Given the two-to-one Democratic voter registration advantage, Dell-Bene had to work hard to make the race as close as it was. She told TAPintoSPF that she and her campaign advisor, former Mayor Al Smith, walked throughout all the districts in Scotch Plains knocking on doors and talking with voters.

“There is nothing I would have done differently. I’m proud of the campaign we ran,” said Dell-Bene. “We stayed true to what the campaign would be, which was grassroots and really connecting to the residents. We worked extremely hard. This was about ‘Principals Over Politics’.”

For the full article, please read Tap Into Scotch Plains and Fanwood here.